The Day in Question

The past pulls out every weapon it has to keep Jake from reaching Dealey Plaza in time to save Kennedy. If he fails, it could mean death for Jake or others close to him. If he succeeds, it could create a world in which he loses everything he has ever known. What is the cost of doing the right thing?

Add plot details for this episode!

Chris Cooper did not appear and received credit only.

Add a memorable quote from this episode now!

The Obdurate Past sends an illusion of Frank Dunning to stop Jake.

Sadie and Jake look for Oswald on the Sixth Floor.

Jake is booked for killing Oswald.

Jake sees a vision of Sadie at the bus station.

Returning to 2016, Jake discovers that Al's Diner is destroyed.

After saving President Kennedy, Jake returns to 2016 to discover a world destroyed by nuclear war.

Harry tells Jake about the war and its aftermath.

Jake meets Sadie in 1960 Lisbon where she has no recollection of him.

Harry comforts Jake and tells him he is a good man.

After returning to a restored 2016, Jake discovers that Sadie is alive.

Jake is overwhelmed with emotion upon seeing Sadie.

Jake shares a dance with Sadie. 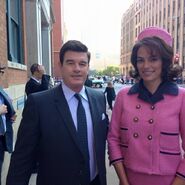 On set in Dallas with Chris Phipps as John F. Kennedy and Deanna Cahill as Jacqueline Kennedy (production photo)

When Jake goes back to 2016 the first time, a building in the distance has the words "Captain Trips" spray-painted on it. This is a reference to the disease that killed off most of the people on earth in Stephen King's "The Stand".[1]

Community content is available under CC-BY-SA unless otherwise noted.
Advertisement